1- and 2-night Pre- and Post-Cruise Hotel Vacation Stretcher packages are available for your Galapagos cruise at the beautiful boutique Hotel del Parque in Guayaquil, Ecuador.

Tucked away in the Andes Mountain range, above the Sacred Valley and just northwest of Cusco, stands Machu Picchu, a UNESCO World Heritage Site, believed to have been a royal estate or sacred religious site for Inca leaders, whose civilization was virtually wiped out by the Spanish invaders in the 16th century. The Citadel was built around 1450 and though Machu Picchu was not thought to have been discovered by the Spanish, it was abandoned a century later during the time of the Spanish Conquest. Although known by the locals, this great Citadel remained unknown to the outside world until being brought to international attention in 1911 by the American historian, Hiram Bingham. Historians believe that Machu Picchu was built at the height of the Inca Empire and is made up of more than 150 buildings, ranging from baths and houses to temples and sanctuaries. To walk through Machu Picchu is to walk through history, with many of its buildings still standing, irrigation systems working and t he pure grandeur of this great Citadel still strong. Extend your time and join us for an incredible journey to Machu Picchu.

PLEASE NOTE: You must be able to walk long distances, up and down stairs, up varied inclines, down varied declines and over very uneven ground to do this tour. We will be at elevations ranging from sea level in Lima to over 11,000 feet in Cusco.

ADDED PHYSICAL REQUIREMENTS FOR GUESTS ON THE OPTIONAL INCA TRAIL HIKE FROM KILOMETER 104: 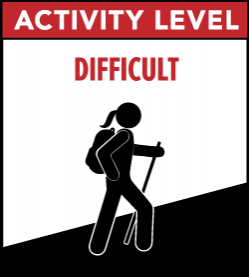 Monday, September 27 - Must be able to hike at elevations higher than 7,000 feet for a minimum of 8 miles with a vertical climb of almost 1,000 feet - Hike over cobblestones, grass, dirt trails, stairs made out of rocks and of varying size

You cannot book Stretchers online but our Travel Consultants will be happy to assist you!

While we do our best to confirm hotels and itineraries in advance, they are always subject to change.

Cancellation Policy: Olivia Companies, LLC is required to honor their contractual agreements with hotels, ground operators, and other outside vendors; therefore, the following cancellation fees apply:
All Vacation Stretcher packages are non-refundable. A handling fee of $75 will be charged for any name changes to hotel and tour packages.
Your booking/payment for vacation stretchers with Olivia Companies, LLC indicates your compliance with the above policies.