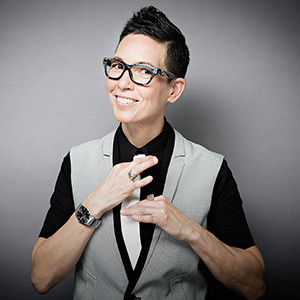 Elvira Kurt is a Canadian national treasure in the Dept. of Comedy, a trail-blazing queer icon who’s done all the things… like, host her own talk show: popcultured with Elvira Kurt, as well as a game show: Spin Off. She’s been in hit TV shows including Baroness Von Sketch Show - for which she was also a writer- teen TV staple, DeGrassi: The Next Generation and, for the youngest viewers, Treehouse TV’s Emmy nominated, Miss Persona. Then there's the long list of TV shows in which Elvira does it all as writer, producer and director of talent: Netflix’s upcoming Drink Masters, Crave TV’s Canada’s Drag Race, CBC’s The Great Canadian Baking Show, CTV’s Master Chef Canada. Add to that the many scripted and unscripted shows Elvira’s written for: Still Standing, This Hour Has 22 Minutes, Game On, Little Mosque on the Prairie, to name but a few. There’s also the numerous doc series where she’s served as writer and host: First Comes Love, Gayest Show Ever, Adventures In Comedy. And the TV shows on which she’s been a judge or correspondent: The Second City’s Next Comedy Legend, eTalk Daily, ‘Q’ and ‘q'. It's a LOT. In her down time -ha!- Elvira, who is also a proud lesbian dad of two, travels the world with sold-out solo live shows, TV appearances and comedy special tapings. She wins stuff too, namely a few Canadian Screen Awards to go with her Canadian Comedy, SF Film Festival, Toronto Fringe Festival Awards, as well as the Jury Choice Award at the Cannes Short Film Showcase for Reel Women Seen -which she also wrote! Clearly, Elvira is no slouch… what’s next for this tireless teacup butch? Stay tuned!