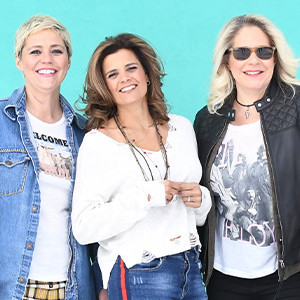 In more than 20 years as one of America's hardest-working bands, Antigone Rising has established a far-reaching reputation for sticking to their instincts. While the all-female New York natives’ live performances have earned the long-term devotion of fans, Antigone Rising's passionate social conscience continues to manifest itself in the group's tireless activism.

The creation of Girls Rising was originally set in motion after Antigone Rising was invited by the US State Department to travel as cultural ambassadors throughout the Middle East. After touring the Middle East, the band traveled to Asia, Europe, Mexico, and throughout the United States bringing the Girls Rising program to schools, refugee camps, and community centers, spreading a message of inclusion.

The band’s activism is reflected in much of Antigone Rising’s latest work, as the trio continues releasing singles to download and stream throughout the year. On the heels of the trio’s final pre-pandemic tour, Antigone Rising made one final stop at Bird & Egg Studio in Oakland, CA. During a day-long session with producer, Julie Wolf, at the helm, the band recorded a handful of songs live. Initially intended to be a stand-alone EP, it was later decided to include the tracks alongside their studio version counterparts to round out what would eventually become True Joy.

During a year of pandemic seclusion, a handful of new songs were written and recorded through the magic of home studios and drop boxes, followed by a successful Kickstarter campaign that enabled the band to complete their True Joy vision.

True Joy album highlights include the song “Avalanche”, a powerful anthem of female empowerment, “Right There with You”, a southern rock blues ballad, and “Badlands”, a song co-written with Grammy award winning songwriter, Lori McKenna in which the band's harmonies nod in the direction of Crosby, Stills and Nash.