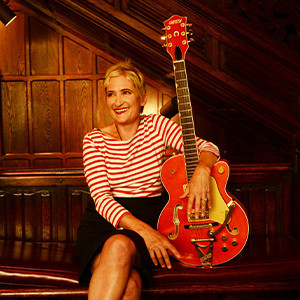 In 12 albums and nearly three decades of recording, Jill Sobule has mused on topics such as the death penalty, anorexia, shoplifting, reproduction, the French resistance movement, adolescence, and the Christian right. Early hit songs included "I Kissed a Girl”—the first song about same-sex romance ever to crack the Billboard Top 20, and no relation to the later Katy Perry tune—and 90s alt-rock anthem “Supermodel,” which was featured in an iconic scene in the film Clueless. Jill has shared stages with the likes of Billy Bragg, Cyndi Lauper, and Warren Zevon.

Over the years, Jill has been active in numerous social and political causes, performing at prisons as part of Wayne Kramer’s Jail Guitar Doors project, playing dates with Lady Parts Justice’s “Vagical Mystery Tour,” and curating Monster Protest Jamz Volume 1, featuring protest songs by Tom Morello, Billy Bragg, Amanda Palmer, Jackson Browne, and many other great artists—as well as Jill’s own pre-2016 election song, “When They Say We Want Our America Back, What the F#@k Do They Mean?,” which traces the history of anti-immigrant sentiment in America.

Recently, she has also been writing for the theater. In 2018, NYU produced her musical Times Square, based on the 1980 cult film of the same name, and in 2020 the Pittsburgh City Theater will debut her one-woman show F*#k 7th Grade, about what she calls “the worst year of my life.” Her latest record, Nostalgia Kills (released on Jill’s own Pinko Records), features new versions of several of Jill’s best songs for the stage, including for Times Square, the off-off-Broadway musical Prozak and the Platypus, and a new adaptation of Yentl, for which Jill wrote the gorgeous ballad “Tomorrow Is Breaking My Heart.”

Nostalgia Kills explores its titular theme through a collection of songs that ponder the past without ever lapsing into easy sentimentality, explores issues our society is still collectively struggling with (LGBTQ rights, teen mental health, our unhealthy obsession with staying young), and gently skewers our tendency to dwell on the past at the expense of addressing the present

Find Nostalgia Kills and more of her work at jillsobule.com.