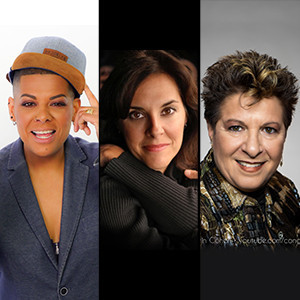 Cocomama is a virtual United Nations of women, playing their own mosaic of world Latin music, powerfully virtuosic yet elegantly musical, creating a sound that is all at once fierce and beautiful! Their debut album Quiero, included in the 2016 Grammy pre-nominations for Best Tropical Latin album, celebrates the coming together of a wide range of musical experiences in three different languages.

Each member of Cocomama has her own artistic vision and talent, giving the group a completely original sound, one that blends musical styles and influences from around the globe: Afro-Cuban, Classical, Jazz, Afro-Caribbean, Latin American, Soul, R&B, and beyond. Cocomama has enchanted audiences with their irresistible groove at New York City’s most popular jazz and Latin clubs, throughout the United States at renowned jazz and world music festivals, and in Latin America.

Christelle Durandy’s artistry is a mosaic: a cross-cultural jazz combination that draws upon a vast spectrum of soul, Caribbean, and Latin inspirations. The melodic threads of her musicianship transcend borders and weave an international music fabric rooted in her loyal love for percussion, polyrhythm, and for words and languages’ rhythmic concepts.

Preserving her stylings, Durandy has brought her musical colors to diverse projects all around the globe. She has been featured with Paul Carlon Octet, Edward Perez Festejation, Toshi Reagon and Allison Miller’s “Celebrate the Great Women of Blues and Jazz,” John Benitez, Luis Enrique, La India, Max Pollak RumbaTap, Ricky Ford and Ze Big Band, Ran Blake, and Climbing Poetree, just to name a few. In Cocomama, Durandy exhibits her talents as a writer, arranger, and performer. She also heads her ensemble Cinq Têtes and has recently joined, as a lead singer, the Grammy award-winning big band Pacific Mambo Orchestra.

Pianist/composer Nicki Denner has worked with a diverse group of artists, including Sheila E., Savion Glover, Michele Lee, and Doc Severinsen, as well other jazz and Latin artists in the United States, Asia, Europe, and Latin America. Denner has released three critically acclaimed albums and she serves as music director for both Cocomama and the New Jersey Tap Ensemble.

She has performed throughout the United States and Latin America and has been a musical ambassador for the State Department in Latin America. A devoted educator as well, Denner has served on the faculty of the Stanford University Summer Jazz Workshop, Jazzhous Kids, the New York City Tap Festival, the New Jersey Tap Festival, and Campamento Internacional de Jazz in Guatemala. She has also contributed to Keyboard Magazine.

Mayra Casales is considered one of the most versatile percussionists of her generation. Born in Havana, Cuba, and raised in Miami, she studied with Carlos “Patato” Valdez. Before long, she was performing with some of the biggest names in Latin music, such as Celia Cruz, Machito, Joe Cuba, Miguelito Valdez, and Tito Puente. Casales moved to New York City, where she continued her musical journey, working with such legendary artists as Dizzy Gillespie, Wayne Shorter, Ray Barretto, Angela Bofil, Walter Bishop, Jr., Jon Lucien, Phyllis Hyman, Carmen Lundy, Tania Maria, David Amram, Regina Carter, and Grady Tate.

She has contributed to recordings by Regina Bell, Kiara, Miki Howard, and Lita Gallaway. She has also toured with Sophie B. Hawkins, Regina Carter, Carmen Lundy, Women of the Calabash, Mauricio Smith, Tania Maria, and The Ojays. Casales founded Cocomama in 2008 and released her first solo CD, Woman on Fire/Mujer Ardiente (which made it to number 19 on the World Charts), on the Afrasia label.