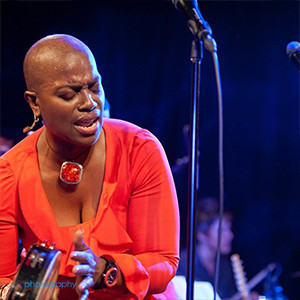 Marcelle Davies-Lashley, Brooklyn native born to West African parents from Liberia and Sierra Leone, respectively, is a singer extraordinaire. Davies-Lashley began singing lead in the church choir at the age of 5 and never stopped. The soothing sacred sound of the warm musical instrument that is her voice will melt your heart and feed your soul.

Davies-Lashley has travelled to five of seven continents, moving hearts to tears of joy with a stage presence and sincerity that is second to none. Davies-Lashley debuted her one woman show Liberian Girl in Brooklyn as a 2019 Suite Space artist at Mabou Mines. She was the featured soloist for the 2017 Shakespeare in the Park production of A Midsummer Night’s Dream at the Delacorte Theater, the score of which was nominated for a 2017 Drama Desk Award. Davies-Lashley played the Queen of Sheba in the international tour of Robert Wilson’s opera The Temptation of St. Anthony, with a libretto written by Dr. Bernice Johnson-Reagon.

Davies-Lashley and her band have set the stage on fire at the Brooklyn Academy of Music Café, the Schomburg Center for Research in Black Culture, Harlem Stage, Lenox Lounge, The Brooklyn Museum, Joe’s Pub in New York City, The Ivy Room, and Freight and Salvage in California. She is a featured vocalist and percussionist, sharing her hypnotizing tambourine skills, on Carl Hancock Rux's Cornbread, Cognac and Collard Green Revolution.

Davies-Lashley has also rendered her musical gift to the background vocals of BeBe and CeCe Winans Greatest Hits, Lizz Wright, and Carl Hancock-Rux, to name a few. Davies-Lashley has her first solo EP, titled Easy to Love, available on CD Baby and iTunes. Stay tuned for her soon-to-be-released single, a cover of Ferron’s “Testimony.” The universe is better for the likes of the music from the depth and gospel-jazz-soul fusion of Marcelle Davies-Lashley.