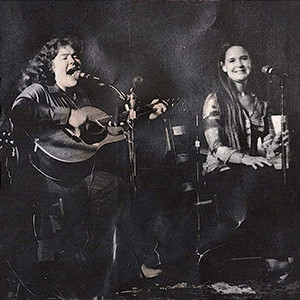 When Dianne Davidson was 15 years old, she marched up to Tracy Nelson, who was performing with her band, Mother Earth, at Vanderbilt University stadium and pronounced "You're gonna need to know me." That prophesy has been borne out with decades of both friendship and professional collaboration.

While they are individually both powerhouse vocalists and tender song interpreters, together they work magic, back and forth and in and out of each song with respect and intense sharing, in a way only two women who are sure of themselves can do.

These two are legends in the Nashville Music Community and work together whenever they can. This is a rare pairing, not to be missed. Dianne and Tracy will be joined by an all-star stellar band.

“Tracy Nelson isn’t so much a singer as she is a force field — a blues practitioner of tremendous vocal power and emotional range.” — Alanna Nash, Entertainment Weekly
“ . . . a bad white girl . . .” — Etta James, from her autobiography, Rage To Live

She has one of the signature voices of her generation.That natural gift has always guided Tracy Nelson’s soul; indeed, allowed her to both write and seek out the deeper songs regardless of niche or genre. A fierce singer of truth, a fountain of the deepest heartache, she is an ultimate communicator and has regularly destroyed audiences across decades of performing. She is one of the few female singers who has had hit records in both blues and country genres, performing with everyone from Muddy Waters to Willie Nelson to Marcia Ball and Irma Thomas, with Grammy® nominations for both her country and blues efforts. John Swenson, writing in Rolling Stone, asserted, “Tracy Nelson proves that the human voice is the most expressive instrument in creation.” With Victim of the Blues (Delta Groove), her 26th album in just over five decades, she has circled fully, back to the original music from South Side Chicago that mesmerized her teenaged mind in the mid-1960s.

Some singers today need a team of backup singers and a ten-piece band. Dianne Davidson could stand on stage with nothing but her voice and her songs and you’d hear more depth and power. She’s played her rock/blues/R&B songs in everything from Carnegie Hall to prominent Nashville venues. There’s a reason Variety called her a “… (a)chillingly powerful vocalist.”

Audiences love her between-song patter as much as her songs. In addition to solo concerts, she’s opened for Neil Young, the MoodyBlues, and many more. She’s sung backing vocals in the studio and on stage with a host of well-known musicians — Linda Ronstadt, the Earl Scruggs Review, JimmyBuffet, David Allen Coe, and too many others to list.

If you want solid songs presented with an impressive set of pipes in an emotion-packed performance, look no further than Dianne Davidson.