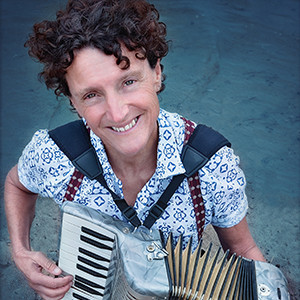 ZOË LEWIS is a band in a body! Vintage swing, gypsy jazz, world-beat grooves on ukulele, piano, guitar, washboard, harmonica, spoons and more! Known for her stories as much as for her music this multi-instrumentalist, singer-songwriter, vaudevillian hails originally from the UK but has made Provincetown, MA her home for the last 28 years. She's traveled to over 70 countries picking up grooves and stories along the way, released eight albums of original material, toured with Judy Collins, the Indigo Girls, Richie Havens, Nanci Griffiths and has even opened for Pat Benetar on the ukulele!

She has won numerous songwriting awards, her compositions have appeared on Broadway, in documentaries, movie soundtracks and in commercials. She’s written and produced two musicals; SNAILROAD and ACROSS THE POND which were staged in Provincetown to packed houses. She heads a 1920’s Prohibition era jazz band ZOË LEWIS AND THE BOOTLEGGERS and her SPEAKEASY NIGHTS have become a big hit on Cape Cod.

In 2014, Zoë was awarded "PROVINCETOWN WOMAN OF THE YEAR" and in 2016,"VOLUNTEER OF THE YEAR" for her grass roots environmental work and ocean pollution campaigns. Every winter she takes her show to Puerto Vallarta,Mexico, performs in Provincetown all summer long and tours the rest of the year.

Her performances are hi-energy and fun, almost circus-like, an entertainer from another era. Get ready for an upbeat and joy filled show!

“This British transplant is blessed with the uncanny ability to uncover the extraordinary beauty in the seemingly ordinary."

"She stormed the main stage playing everything from swinging folk and latin jazz to acoustic funk and sprightly celtic-flavoured tunes. Her boundless energy was hard to ignore." —OTTAWA XPRESS, Canada

"A masterful combination of song, performance and artistry with a contagiously positive attitude and free spirit. Probably one of the most the most charismatic performances I've ever seen." — BAY GUARDIAN, SanFrancisco, CA

"Her indie style playful, yet dharmic songs and troubadour performances are infectious. She captivates and endears the audience to hang onto every word." — Roots and Wings, Boston.