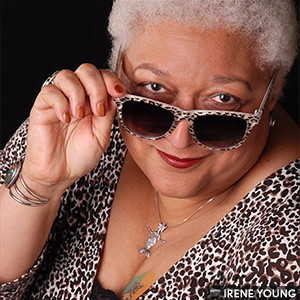 Jewelle Gomez (Cape Verdean/Wampanoag/Ioway) was born in Boston where she was raised by her great grandmother. She graduated from Northeastern University and then from Columbia University Graduate School of Journalism in New York.

She worked at WGBH-TV in the 1960s on the staff of one of the first weekly, Black television shows, Say Brother, then in New York on the pilot shows for The Electric Company. She has taught creative writing and popular culture at institutions of higher learning from San Francisco State University to Hunter College (NYC).

She is the author of seven books including the double Lambda Literary Award-winning, vampire novel, THE GILDA STORIES, whose 25th Anniversary edition was recently published by City Lights Books. She’s written for numerous publications including The NY Times, The San Francisco Chronicle,The Village Voice, Ms Magazine, Black Scholar, The Advocate and the Bay Times. She was the recipient of a National Endowment on the Arts Fellowship in Literature and two California Arts Council Artist-in-Residence grants. In 2017, she received the Barbary Coast Trailblazer Award from LitQuake. She is a 2018 Community Grand Marshall for San Francisco PRIDE.

She was on the founding boards of Gay and Lesbian Alliance Against Defamation (GLAAD), the Astraea Lesbian Foundation and the Open Meadows Foundation. She was previously the director of grants at the San Francisco Arts Commission and Horizons LGBT Foundation; as well as Director of the Literature Program at the New York State Council on the Arts. She also served as the director of the Poetry Center and American Poetry Archives (SFSU). Until recently, she was the president of the San Francisco Public Library Commission.

She is currently playwright in residence at New Conservatory Theatre Center in San Francisco which produced "Waiting for Giovanni," her play about James Baldwin which is part of a trilogy about African American artists in the first half of the 20th century. The play has its New York City Premier at The Flea Theatre July 12. "Leaving the Blues," her second play in the trilogy is about singer/songwriter Alberta Hunter and also premiered at NCTC. The third play, "Unpacking in Ptown," will open New Conservatory’s 40th anniversary season in 2021.