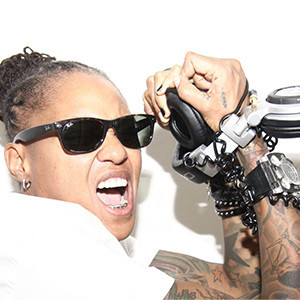 Mary was introduced to the art of turntables and mixing by her older brother while he practiced daily in the basement of their family’s Rosedale, Queens, home. Barely a teen yet intrigued by the techniques of that era’s many notable DJs, Mary worked diligently to perfect her skills. With a combination of natural talent, passion, and influences from her Haitian background, Mary Mac quickly became a highly sought-after DJ.

Mary Mac’s introduction to the entertainment industry started when, while she was deejaying a NYC loft party, a Def Jam A&R executive asked her to DJ for their newest hip-hop artist. This gig soon led to her involvement in the nationwide Phat Jam Tour of 1992, featuring artists Run DMC, Redman, and Onyx. By the mid-90s, Mac’s reputation was well established, leading to key opportunities for her growth.

Over time, Mary Mac continued to make her name. Booked early on for the celebrity birthday parties of Whitney Houston, Queen Latifah, MC Lyte, and Queen Pen, she later began spinning at events for the Brooklyn Museum, Monie Love, and DJ Kid Capri. In addition, she’s played alongside recording artists such as Red Café of Def Jam West, Cheri Dennis of Bad Boy Records, Da Brat of So So Def, and Robin Thicke of Interscope Records.

DJ Mary Mac has spun with many other influential DJs, such as Funkmaster Flex, Jazzy Joyce, Mad Linx, Mister Cee, Spinderella, and SNS. Since 2013, she has been Madonna’s resident DJ, rocking out as the headlining DJ for her Oscar after-party and the opening act on her Rebel Heart Tour. She also deejayed for Prince, Stevie Wonder, and Ashton Kutcher’s SXSW after-party. Today, she is the resident DJ for Mona Scott-Young of Monami Entertainment, Out of Tune, Mayor Bill DeBlasio, and Salesforce.

In 2013, Mary Mac was featured in Huffington Post’s article “23 Inspiring Women Who Are Blazing Trails for the LGBT Community” for her accomplishments of the past 20 years. Nevertheless, Mary Mac remains humble and just wants the world to feel good, through reflections of her sound and energy, each and every time she spins.