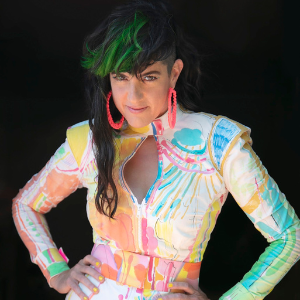 Bitch makes witchy poet pop. She does it with violins and synthesizers. The resulting songs from her new album Bitchcraft, which came out on Kill Rock Stars February 4th, 2022, are heartbreaking, spectral, political and beautiful. Bitch is based in Los Angeles after living in New York for many years. She’s a longstanding queer music icon and “Bitchcraft” is her 9th studio album. Bitch first achieved notoriety as one half of the queer folk duo Bitch & Animal. The band went on tour with Ani DiFranco, whom they met while playing a gig at a pizza shop in Provincetown. In the mid 2000s, Bitch went solo, and shared stages with the Indigo Girls, acted in John Cameron Mitchell’s film Shortbus, co-wrote a song with Margaret Cho, produced two albums of her elder folk hero Ferron, and licensed some of her songs to The L Word. Eight years ago, she began to weave together Bitchcraft, her latest record.

Bitchcraft was born in a move from New York City, where Bitch had lived for 15 years, to a log cabin in the woods. There was all the time in the world to make art, and it was there, in the cabin, that Bitch began to write some of the songs that would appear on Bitchcraft. “It gave me space to think about the biggest version of myself that I could be,” she says of those early days in the cabin. The songs she wrote were a departure from anything she’d ever written before, and she began to craft huge pop tracks with the help of her trusty violin. Then, she moved to LA and Bitchcraft began to shapeshift again. In the years that followed, Bitch assembled a coven to complete it. She called on Anne Preven (Beyonce, Demi Lovato), the rapper God-des and Roma Baran (Laurie Anderson) as advisors. Melissa York (Team Dresch, The Butchies) and Faith Soloway (Transparent) co-wrote some of the songs. Bitchcraft, her first album in 8 years, is one that makes you think and makes you dance. It was recorded in LA, Austin, Provincetown, and Boston. Full of violins, synths, and huge vocals, the record is neon pink and in your face. It’s Joni Mitchell set to a click track; it’s queer Cyndi Lauper and will hex you with its brilliance. It also makes you think: about the state of the world, about evil politicians, about what it means to exist as a woman, and how to find joy along the way.