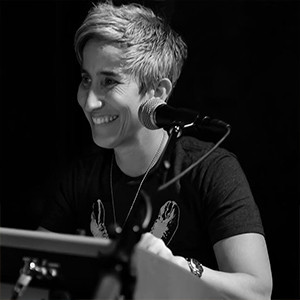 Julie Wolf is a music producer, composer, multi-instrumentalist, music director and teacher. She has appeared on stages around the world and on numerous critically acclaimed recordings. She has collaborated with Carly Simon, Indigo Girls, Ani DiFranco, Maceo Parker, Bruce Cockburn, Amy Ray, Dar Williams, Rumer and Wayne Horvitz among many others. Recent highlights include television performances with Carly Simon (Late Night with Stephen Colbert, The View and Live with Kelly and Michael), recording a duet with Carly Simon for the release of Chimes of Freedom:The Songs of Bob Dylan, producing Bruce Cockburn, working with Joan Baez and producing records for multiple artists of varying genres.

Throughout all of these adventures, Julie has continued her work with Olivia which began in 1994, making this her longest standing gig! She’s thrilled to be here with us accompanying many of the musicians onboard, giving some rare solo performances from behind the piano and reuniting with Olivia community!