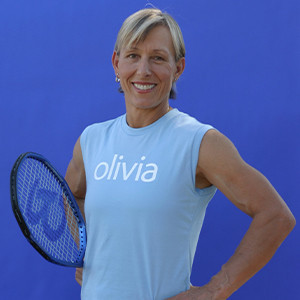 The most successful female tennis player of the Open era, approved Martina Navratilova amassed an unmatched number of professional records over the course of a career that spanned an amazing four decades. Legendary tennis champion Martina Navratilova is undeniably one of the greatest athletes of all times.

The statistics tell part of her story:

Over a spectacular career that has spanned four decades, Martina won an unprecedented 59 Grand Slam titles, including a record 9 Wimbledon singles championships: 167 singles and 177 doubles championships. Her decades-long rivalry with Chris Evert is considered one of the greatest in sports history, with Martina sporting a 43-37 advantage.

Over the course of her tennis career, Martina was distinguished as the WTA's "Tour Player of the Year" seven times, named the Associated Press's "Female Athlete of the Year" and declared one of the "Top Forty Athletes of All-Time" by Sports Illustrated. After being inducted into the International Tennis Hall of Fame, she continued to take part in WTA events as well as the 2004 Olympics Games. As she approached her 50th birthday in 2006, she decided to leave the tour circuit behind after her final Grand Slam, a mixed-doubles championship with Bob Bryan at the U.S. Open. Still in phenomenal shape on the verge of 50, she became the oldest player to ever win a Grand Slam title.

But there is far more. Martina played tennis with a singular energy, passion, and emotion. To this day, Martina – more than anyone else – is known for taking women’s tennis to an entirely new level with her speed, aggression, and fitness.

Martina provides her articulate, intelligent and outspoken commentary to the Tennis Channel's audience during its coverage of the Grand Slams. She is an ambassador for the WTA and is a regular commentator for the BBC and Tennis Channel at Wimbledon. Martina also works for Amazon Prime Video and worked for them for the first time at Flushing Meadows for the US Open 2019. In September 2019 she also starred in the Netflix comedy drama "The Politician" She spends as much time as she can with her family in Miami, and often finds herself traveling the world, speaking at events, playing in numerous exhibition matches, and tirelessly promoting all of the issues that are close to her heart.