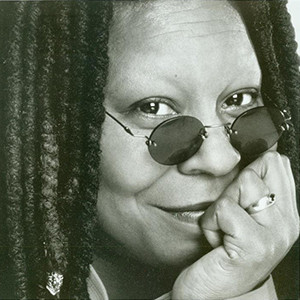 Whoopi Goldberg is an actor, comedian, author, and television personality. A recipient of numerous accolades, Goldberg is one of sixteen entertainers to have won an Emmy Award, a Grammy Award, an Academy Award, and a Tony Award.

Goldberg's breakthrough came in 1985 for her role as Celie, a mistreated woman in the Deep South, in Steven Spielberg's period drama film The Color Purple, for which she was nominated for the Academy Award for Best Actress and won her first Golden Globe Award. For her performance in the romantic fantasy film Ghost (1990) as an eccentric psychic, Goldberg won the Academy Award for Best Supporting Actress, making her the second black woman to win an Academy Award for acting, and a second Golden Globe, her first for Best Supporting Actress. In 1992, Goldberg starred in the comedy Sister Act, earning a third Golden Globe nomination, her first for Best Actress – Motion Picture Comedy or Musical. She reprised the role in Sister Act 2: Back in the Habit (1993), making her the highest-paid actress at the time.

A theatre performer and producer, Goldberg has performed in Broadway productions, one of which produced a comedy album that earned her a Grammy Award. She has also won a Tony Award as a producer of the musical Thoroughly Modern Millie. In television, Goldberg is known for her role as Guinan on Star Trek: The Next Generation and for co-hosting and moderating the talk show The View since 2007, for which she won a Daytime Emmy Award.