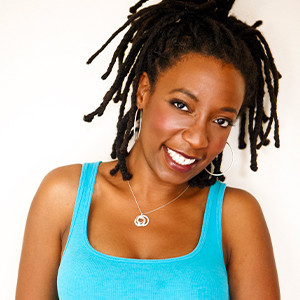 In nine short years, Gloria Bigelow has filmed five comedy specials for television. Her most recent, Wanda Sykes Presents Herlarious was on Oprah’s OWN network. She also appeared on NBC’s Last Comic Standing, where one of her jokes made it into the 100 best jokes of the season.

Subtle, disarming and witty – Bigelow is a comic who doses out humor in bite-sized chunks, easy for the listener to swallow but relentless nonetheless. With issues of sexuality, race, and gender at the forefront of her work, her humorous stories have made her a one to watch on the national comedy scene. She is every bit as subversive and political as she is funny.

An out black woman, she’s got a bone to pick with everybody and she does so by wittingly tackling issues from misogyny in music to the ridiculousness of racism, all done with a smile. Coming to comedy from a background of acting and writing, she is a natural improviser and a keen observer of life – her facial expressions are a punch-line in and of themselves.

Gloria’s humorous opinions on life have been chronicled in a blog ‘The Persuasive Pundit,’ and she has recently been published in a Seal Press Anthology called Here Comes the Brides! Reflections on Lesbian Love and Marriage. She is currently working on a memoir that humorously recounts her outlandish and hysterical misadventures in the city. From colleges to comedy clubs, her honest brand of humor keeps her audiences laughing, thinking, and wanting more.