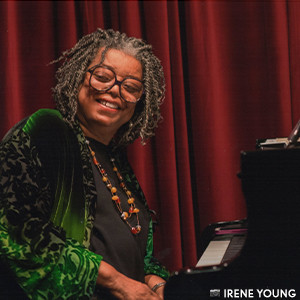 Ms. Watkins is the recipient of several granting foundations such as Meet the Composer, National Endowment for the Arts, Gerbodi Foundation, Zellerbach Family Fund and Calfornia Council for the Arts. She is an eclectic composer. She is also a pianist, arranger, recording artist and record producer. Much of her music reflects a love for many styles of music whether  jazz, gospel, Latin, country, rock, classical or pop. She has composed for solo piano for both adults and children, wind ensembles, string quartet, chamber and full symphony orchestra. She has also composed for theater, dance and film, songs for solo vocalists, vocal ensembles and large choruses. In 2015 she was commissioned by Women in Music to write a 22 minute symphonic work for the National Women’s Music Festival which was premeired in July, 2016 in Middleton Wisconsin. She has completed three operas, Queen Clara, with Lance Belville as librettist, and her second  opera, Dark River, in which she composed both music and libretto, commissioned by and premiered at the Oakland Opera Theater and later premiered on the east coast at Mt. Holyoke College. The production of her latest opera, Emmett Till, created with Clara Coss as librettist, is currently in the planning stages with The Harlem Lyric Opera Theatre Company for the 2018-2019 performance season.

While continuing her work as a composer, Mary Watkins continues to perform both solo piano and as part of her ensemble group. She conducts improvisation workshops, and teaches piano and music theory privately in Oakland, CA.