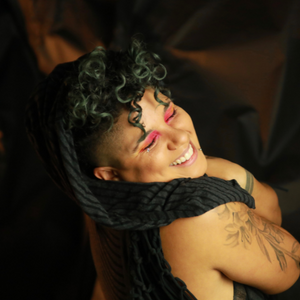 Be Steadwell is a musician, filmmaker, storyteller from Washington DC.  In her live performances, she utilizes looping, vocal layering and beat boxing to compose her songs on stage.  Be's original music features earnest lyricism, and Affirming LGBTQ content.

After receiving a BA at Oberlin College, Be completed her MFA in film at Howard University in 2014.  Her film Vow of Silence featured in film festivals around the world, including Black Star, HBO's OutFest, The Schomburg Center, Inside Out Toronto, and Fringe Fest UK. In 2017, Issa Rae Featured Vow of Silence on her Short Film Sundays Series.

Be has shared stages with fellow artist Activists Big Freedia, Nona Hendryx, Nikky Finney and Gina Yashere.  In 2017 Be sang at The Women's March on the National Mall behind Maxwell and Janelle Monae in Toshi Reagon's Big Lovely Band.  In May 2018 Be released her newest album "Queer Love Songs".  In 2019 Be composed the music for The Alvin Ailey dance company's production of "the gone".  Later that year, Be wrote and directed a musical “A Letter to My Ex”. Be’s musical tells stories of love, loss and intimacy through a collage of music, movement and film -- narrating one character’s journey through the year following a breakup.

In 2020, Be released her newest album, “Succulent”. During the pandemic, you can find Be on her Patreon channel – patreon.com/besteadwell