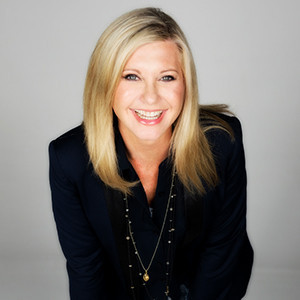 Olivia Newton-John’s appeal seems to be timeless. With a career spanning more than five decades she is still a vibrant, creative individual adored by fans around the globe.

With more than 100 million albums sold, Olivia’s successes include four Grammy Awards (including “Record of the Year” and “Best Female Pop Vocal Performance” in 1974 for “I Honestly Love You” and the first ever “Video of the Year” Award for “Physical”), numerous Country Music, American Music and Peoples Choice Awards, ten #1 hits including “Physical,” which topped the charts for ten consecutive weeks, and over 15 top 10 singles.

As a breast cancer “thriver”, Olivia has become increasingly well-known and respected for talking openly about her journey with breast cancer and for promoting public awareness of the importance of early detection. After 10 years of fundraising over $200 million the Olivia Newton-John Cancer & Wellness Center (ONJCWC) opened in June 2012, and provides a comprehensive range of services and facilities for cancer treatment, education, training and research including Olivia’s dream of a wellness center to help patients heal - mind, body and spirit.

Olivia continues to give back to the community generously and has been acknowledged many times by charitable and environmental organizations for her ongoing efforts, among them: the American Red Cross, the Environmental Media Association, the Women’s Guild of Cedar’s Sinai Medical Center, and the Rainforest Alliance and Concept Cure.

Also in 2010, Olivia was honored with the prestigious Order of Australia from Australia’s Governor General. She also released her second book, “LivWise: Easy Recipes for a Healthy, Happy Life” (Murdoch Books) in Australia in 2011.  In “LivWise,” Olivia explains her belief in the importance of eating a healthy diet in order to maintain wellness and balance. All of Olivia’s proceeds from the cookbook sales benefit the Wellness Programs at the ONJCWC.

In April 2014, Olivia began her residency at the Flamingo Las Vegas with “Summer Nights,” a musical journey through her career in movies and music. To coincide with the show, she released “Hotel Sessions,” an EP collection of songs recorded in hotel rooms in Melbourne over a ten-year period with her nephew Brett Goldsmith.

With her current and ongoing projects and philanthropic endeavors, Olivia’s worldwide popularity is as strong as ever!