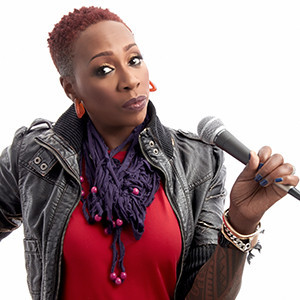 Gina Yashere was born and raised in London by her Nigerian parents. Before becoming a comic, she worked as an elevator engineer for Otis.

She has been a stand-up comedian and TV star in the UK for several years now, with appearances on iconic TV shows such as Live at the Apollo, Mock the Week, and The Lenny Henry Show, for which she created and played the popular comedic characters Tanya and Mrs Omokorede.

Gina broke onto the American comedy scene with her appearances on Last Comic Standing (NBC), where she made it to the final 10—and then never went home! She went on to be named one of the top ten rising talents by the Hollywood Reporter. Gina is also known in the US for being the only British comedian to ever appear on the iconic Def Comedy Jam as well as for her appearances on The Tonight Show (NBC), Crashing (HBO), and @midnight (Comedy Central), her one-hour stand-up specials Skinny B*tch (Showtime), Laughing to America (Starz), and Ticking Boxes (Sirius XM), and now as the British Correspondent on Comedy Central’s The Daily Show with Trevor Noah.

Gina’s fourth stand-up special, currently streaming on Netflix as part of The Standups compilation, is garnering great reviews. She has performed for audiences not just in Europe, the US, and Australia, but also in Asia, where she has had numerous sold-out appearances in Singapore, Indonesia, Malaysia, and Hong Kong. Gina has also performed numerous times at the prestigious Just for Laughs Comedy Festival in Montreal and Toronto. Her feature films appearances have included Kiss Kiss Bang Bang and Mr In-Between, and she has also appeared on the West End’s Arts Theatre stage, in The Vagina Monologues.

Gina currently resides in Los Angeles, where she is producing, writing, and acting on the new CBS sitcom Bob Hearts Abishola, which she co-created with Chuck Lorre, and working on a memoir.